From Crippling Depression to Playing Hoops With Obama: Ben Nemtin’s 5 Steps to Making Your Wildest Dreams a Reality

Ben Nemtin’s battle with depression cost him everything. He lost his spot on the Canada National Rugby team and his academic scholarship to college. During those low moments, he realized he’d been living the life others wanted for him — not the life he wanted for himself. To break free, he asked himself one simple question: What do you want to do before you die?

After writing an epic 100-item bucket list, Nemtin loaded three friends into a rickety RV and criss-crossed North America to make his dreams a reality. One by one, things that once seemed impossible — playing basketball with President Barack Obama, getting interviewed by Oprah Winfrey, and drinking a beer with Prince Harry — started to happen. For every dream Nemtin and his friends achieved, they helped someone else reach theirs. They reunited an estranged father and daughter and surprised a young woman with a bionic arm. And, they captured it all on video. Called The Buried Life, Nemtin’s self-funded documentary snowballed into an MTV show and New York Times best-selling book.

What’s the lesson for startup founders? Anything is possible if you have the courage to try.

Nemtin shared his story during a recent visit to LIFT Labs PHL. Below are Nemtin’s top tips to help founders stay connected to their true passions, create inspiration through action, and keep their mental health in check.

1. Categorize your dreams as projects.

“Dreams have a funny way of staying dreams, but you can break projects down into manageable steps,” said Nemtin. “Writing it down is that first step.” For Nemtin, it was a seemingly achievable bucket list. For you, it could be finally writing that business plan or starting to tinker with a new technology. The trick is to simply get started.

Nemtin received months of rejection emails from the White House in his quest to play basketball with President Obama. Yet he persisted and ultimately succeeded. “You need just one ‘yes’,” Nemtin reminded us. “You’re not done until you get your ‘yes.’” 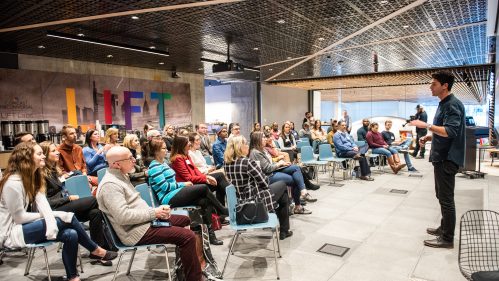 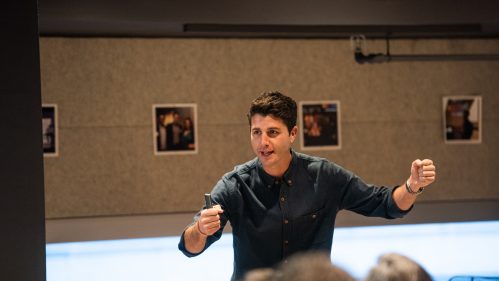 “Fear stops us — whether it’s the fear of what other people think or the fear of failure,” he said. Remember, people are thinking about you much less than you think. And failure? It’s just part of the learning process. Stop waiting for the perfect moment and just go for it.

Most people set realistic, practical goals — meaning people who dare to dream big actually have less competition than they might suspect. So shoot your shot, and see how far it goes. You might be thrilled by the results. “A big dream motivates you to get out of bed every morning, and it rallies the troops at your side,” said Nemtin.

Entrepreneurs face high rates of depression, ADHD, substance abuse and other mental health issues, according to a UC Berkeley study. Nemtin’s advice? Stay mentally fit. Aside from simple (yet crucial) acts of self-care like getting adequate sleep, and exercise, Nemtin encourages entrepreneurs to surround themselves with people who will watch over their mental health. “If you’re getting burned out there, there needs to be an awareness,” he said. “Surround yourself with friends, coaches or therapists who can act as a litmus test outside of yourself — and will hold you accountable to make time for your own recovery and rest.